﻿KODA﻿, or the Keith Dickson Accordion Orchestra as it was formerly known, was formed in 1987 to provide an opportunity for young accordionists to meet regularly and play music together. Rehearsing in the village of Closeburn, Dumfriesshire the highlight of the band's year was competing at the NAO UK Accordion Championships held in Blackpool and Scarborough. 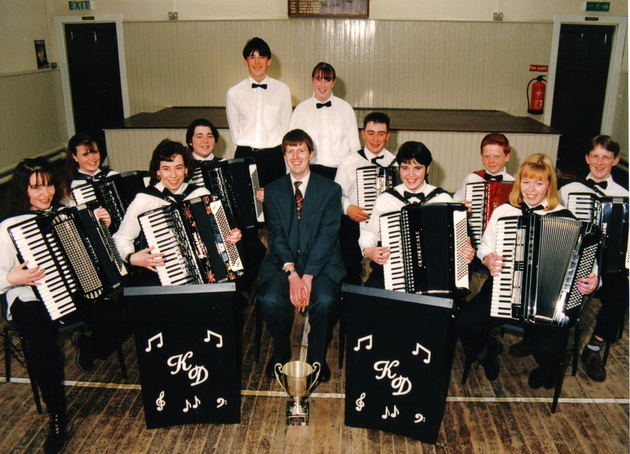 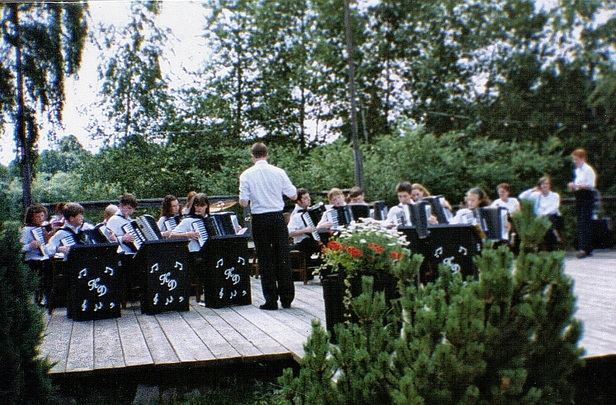 Performing at the Muhlenmuseum in Gifhorn, July 1997
......Musical Director Keith Dickson decided to change the style of the band, (which by now were rehearsing in Symington, Lanarkshire), by introducing Female Vocals into the line-up. With Keith now writing and arranging all the band's repertoire the “new sound” was well received by large audiences at Ingliston Exhibition Centre (4000 people) and at Edinburgh’s Usher Hall.1998 saw the introduction of Scots Fiddle and Highland Bagpipes into the line-up. The group then went on to win their first UK “Accordion Showband” title at the UK Accordion Championships.....a feat which they were to repeat several times!  In 1999 the band enjoyed a short trip to Normandy, France and was approached by Shielburn Associates to record their debut CD “Mist in the Glen”. which went on to sell over 3000 copies. 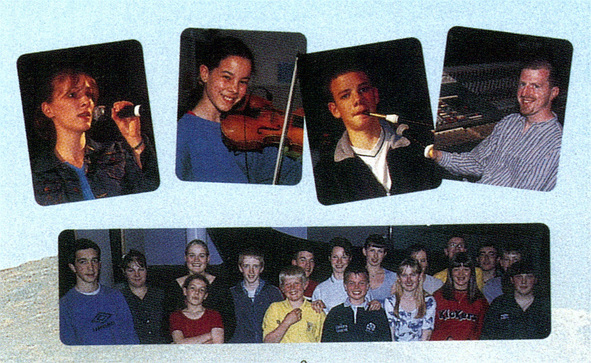 The band in 1999
After winning a "Danny Award" (an award presented to the top six acts in the "Open Stage") at  “Celtic Connections 2000" in Glasgow,  it was agreed that as the band no longer sounded like a typical “Accordion Orchestra", a name change would be beneficial. It was decided that KODA (an anagram of the initials of the band’s original name) would be the group’s new name. The band were then invited to perform at Brunton Theatre, Musselburgh (Variety Concert) and in the Shetland Isles in July 2000 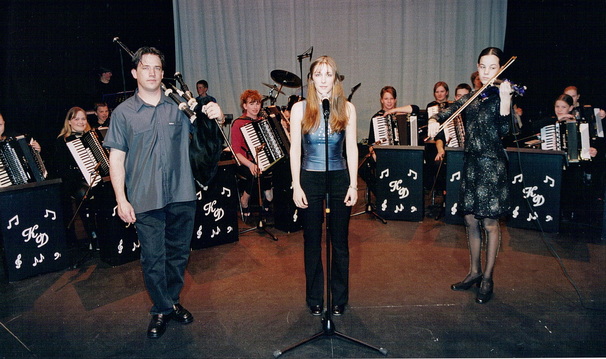 KODA at the Brunton Theatre, Musselburgh in 2000
In 2001, (now with Guitar and Percussion and rehearsing in Biggar, Lanarkshire), KODA were invited to perform at the Glasgow Royal Concert Hall (Celtic Connections) and at Wembley Conference Centre (London Accordion Festival).

In February 2002, the group received a “Special Award” at the European Accordion Festival in the City of Prague, Czech Republic. The group’s unique style was sharply contrasting to the other groups, but they were well received by the audience and other performers who seemed suitably impressed, if not surprised, by the band's unique and refreshing approach.  Later in the year KODA released their second CD “Tight Squeeze” coinciding with a return visit to the Shetland Isles. 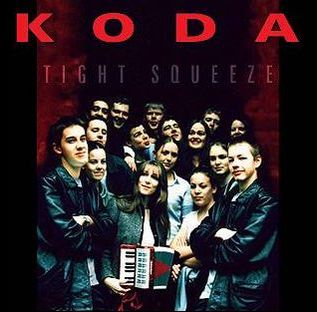 ​In July 2003 the current  band line up made their final appearance at the 10th T in the Park. A "new look" KODA appeared at Peebles Arts Festival and the First Biggar Little Festival. In May 2004 this young group visited the UK Accordion Championships, held in Scarborough, winning the “Accordion Showband” and “Entertainment” categories. 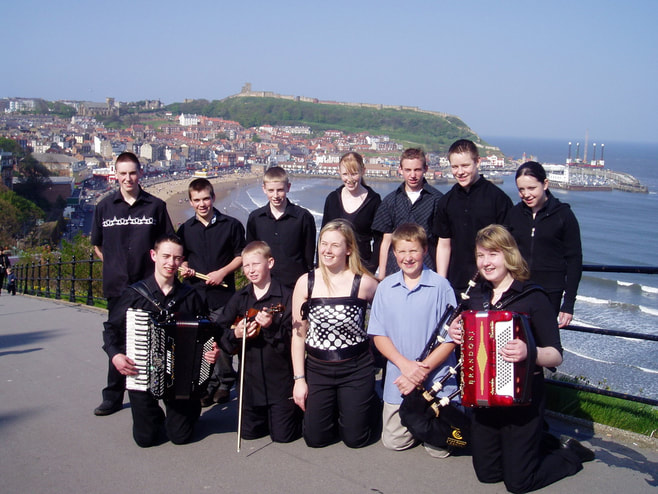 UK Showband Champions 2004
​The band performed at a “Grand Concert” in Lanark with Big Band KGS Hemmingen, a group from near Hanover, who promptly invited KODA to perform in Germany in 2005. A visit to Hanover, Germany in September 2005 for a few concerts included the band cooling off beside the fountain in Herrenhausen Gardens. 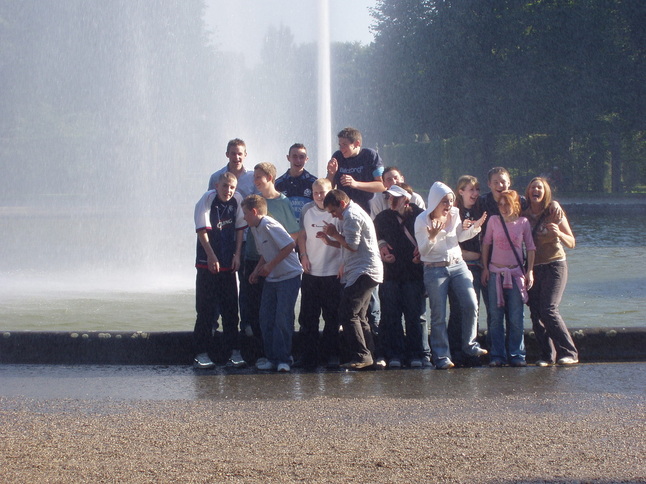 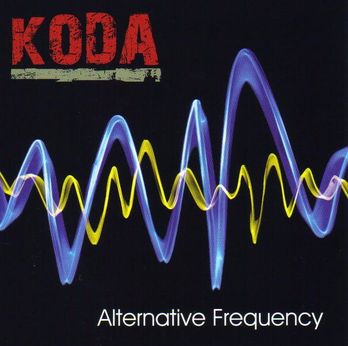 ​2006 saw KODA travel to N. Ireland to perform at the Dunloy Accordion Band 50th Anniversary Celebrations. In November the band performed at a concert  in the Edinburgh International Conference Centre for HRH the Earl of Wessex.

HRH the Earl of Wessex with his copy of "Alternative Frequency"
KODA were presented with the 2006 "South Lanarkshire Music Group of the Year" award. KODA Musical Director Keith Dickson (fourth from left) is pictured receiving the award from Gilbert Cox, Lord Lieutenant of Lanarkshire. 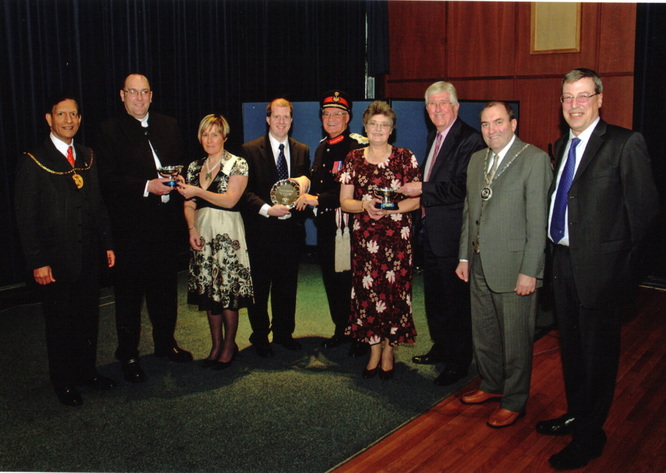 Receiving the "South Lanarkshire Music Group of the Year 2006" award in Hamilton
In July 2007 KODA travelled to Germany to perform at a few events. Venues included Hemmingen, Gifhorn and Husum. For a break from the music the band went canoeing on the River Eider in Northern Germany. 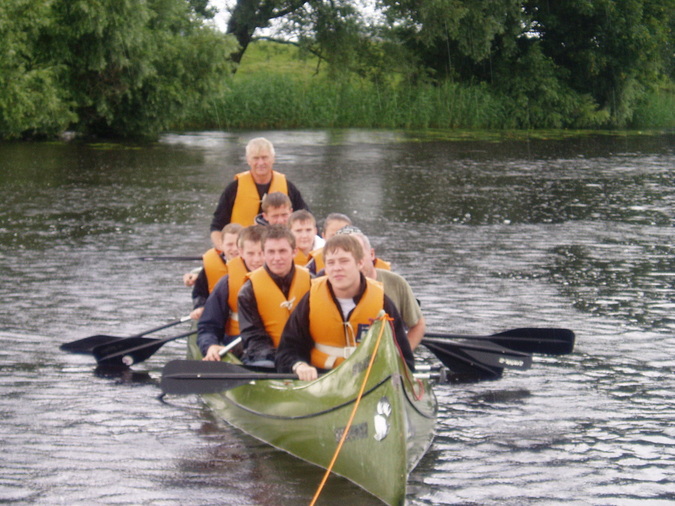 Canoeing on the River Eider near Tielenburg in Schleswig Holstein
2008 events included a lively "Festival Fling" in the Corran Halls, Oban as part of the 25th Highlands and Islands Music and Dance Festival. 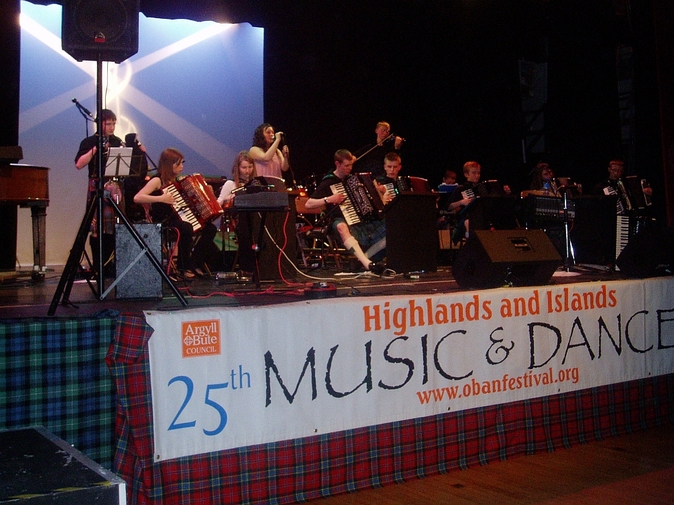 Corran Halls in May 2008
With numerous changes in the band line-up KODA recorded their fourth CD "Keepin' it Reel" in Park Lane Studios, Glasgow in Summer 2008 and released this album in February 2009. 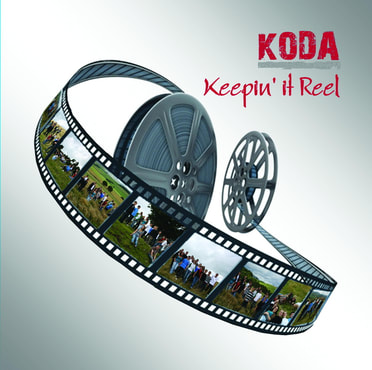 The band performed two tracks from the CD at the MG Alba BBC Scots Music Awards in November 2009, with the performance broadcast on BBC Television on Nov 30
In August 2010 KODA travelled to Lower Saxony, Germany to perform in Hemmingen (Twin Town of Clydesdale) and Gifhorn (Twin Town of Dumfries). 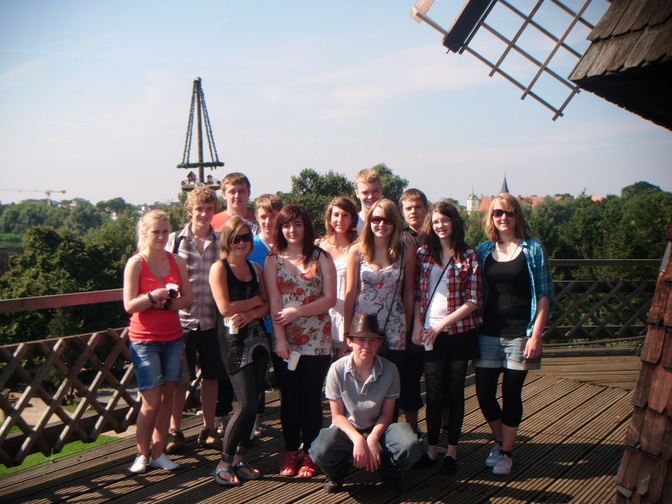 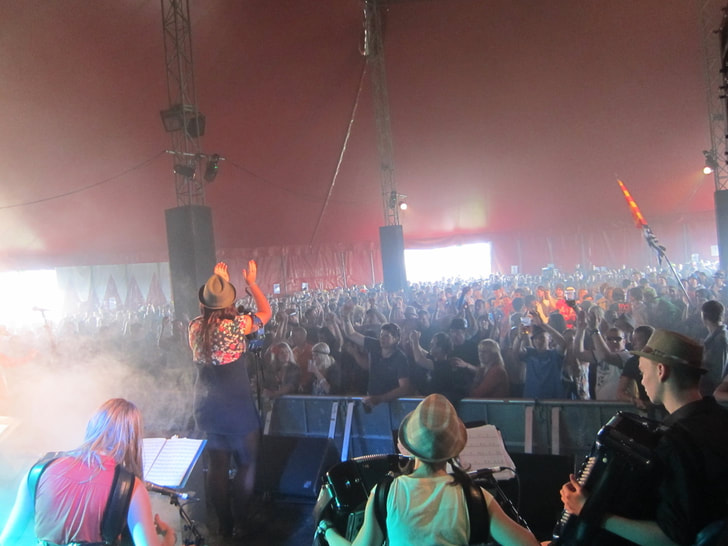 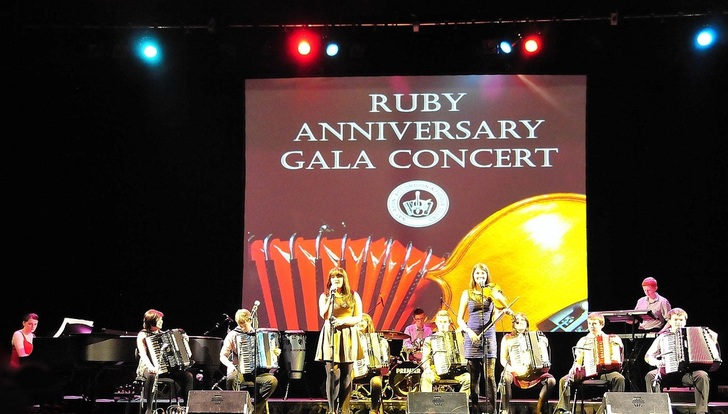 Perth Concert Hall 2012 © Frank Morrison
2012 marked 25 years since Keith Dickson formed his first Accordion Orchestra in 1987. To celebrate the occasion an event was held in Crawfordjohn Hall (location of the orchestra's first concert) on Sun 16 December, 2012. Many former and current members were in attendance and Keith was presented with a clock (pictured below) 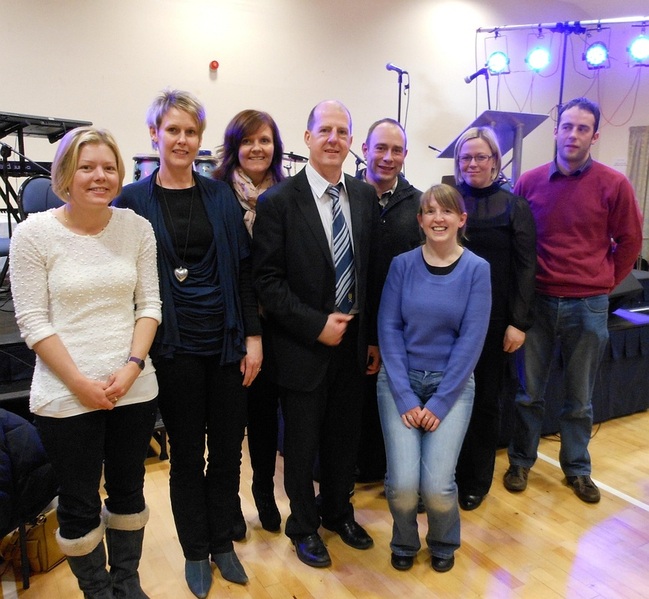 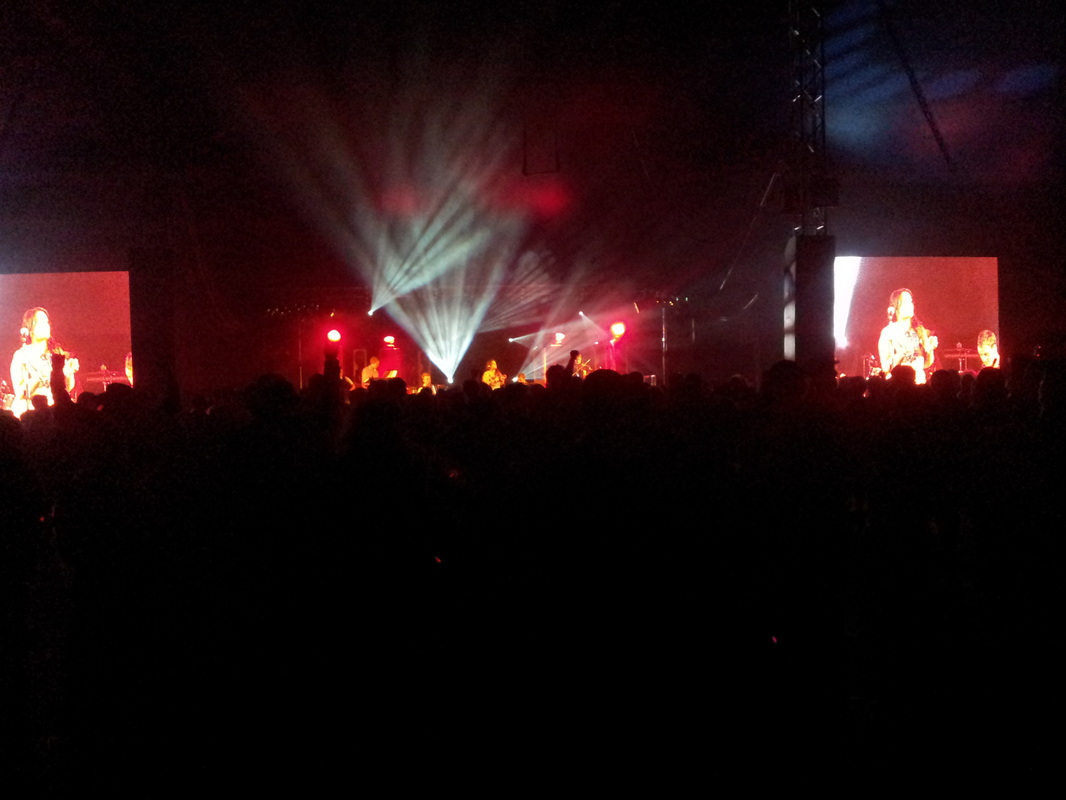 Cabaret Club at T in the Park 2013
In 2014 KODA moved their rehearsal venue to Biggar Municipal Hall and performed at a concert as part of Biggar Gala Week Celebrations. 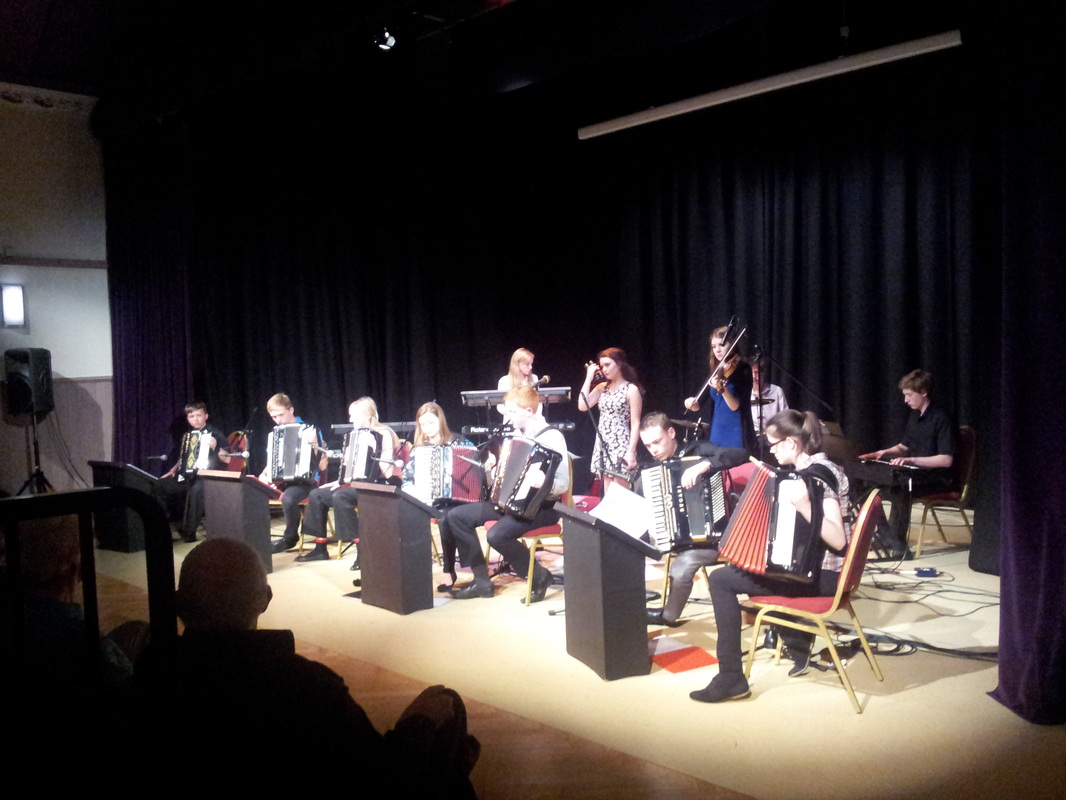 Gala Week Concert in Corn Exchange, Biggar
In 2017 KODA performed at an event in Biggar entitled "Pentland Rock" - showcasing a collection of Scottish Traditional Music exploring the history and beauty of the Pentland Hills. 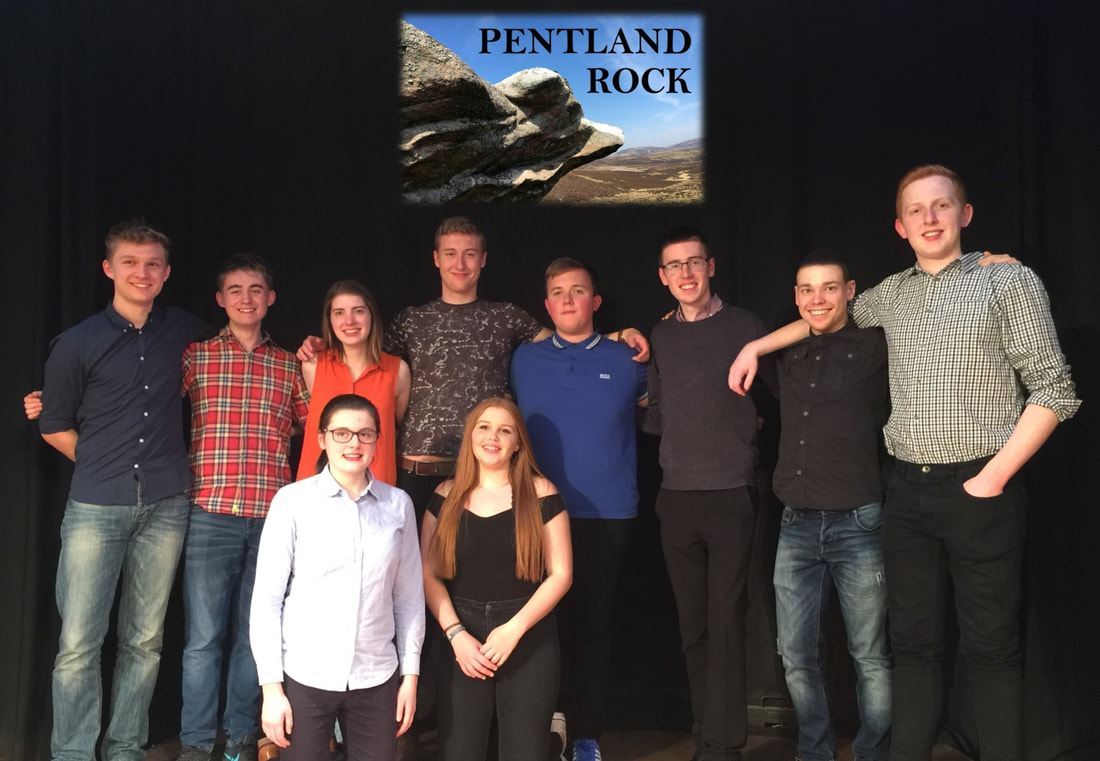